One unsuspecting day in October, we invited our parents, Bryan’s grandma, and my brother to come to a “Fall Party” at our home. It just so happened to coincide directly with when we would be finding out the gender of our little one! I couldn’t let the surprise factor go to waste so this post will highlight our “Fall Party” turned SURPRISE “Gender Reveal Party”.

One unsuspecting day in October, we invited our parents, Bryan’s grandma, and my brother to come to a “Fall Party” at our home. We had been wanting to have all of our parents over for quite some time to show them our gratitude and thanks for everything they do for us. It just so happened to coincide directly with when we would be finding out the gender of our little one! I couldn’t let the surprise factor go to waste so this post will highlight our “Fall Party” turned SURPRISE “Gender Reveal Party”.

To start, Bryan and I prepared a ton of home-cooked food for our family. I was able to bust out my fall decor and pretty dishes and light all my fall scented candles. Bryan was the master chef of the day, and prepared pretty much all of the food. We had an assortment of amazing appetizers which included antipasto kabobs, shrimp, buffalo chicken dip, veggies, and deviled pumpkin eggs. For the main course Bryan made an amazing apple cider pulled pork with apple coleslaw, homemade crab mac & cheese, and salad.

Between appetizers and the main course, we decided to use that time to surprise our parents. We had originally told them all that we were unable to get an appointment to find out the gender until the following week. This little white lie seemed to work. I then set up a “Guess the Gender” station where I instructed everyone to pour champagne into a pink or blue flute and whichever color they chose would represent their guess as to what baby’s gender would be. To aid in their decision, I also made an “Old Wives Tale: Gender Predictor” chart that showed some of the symptoms I was experiencing where the underlined word represented what the old wives tale said about the symptom. 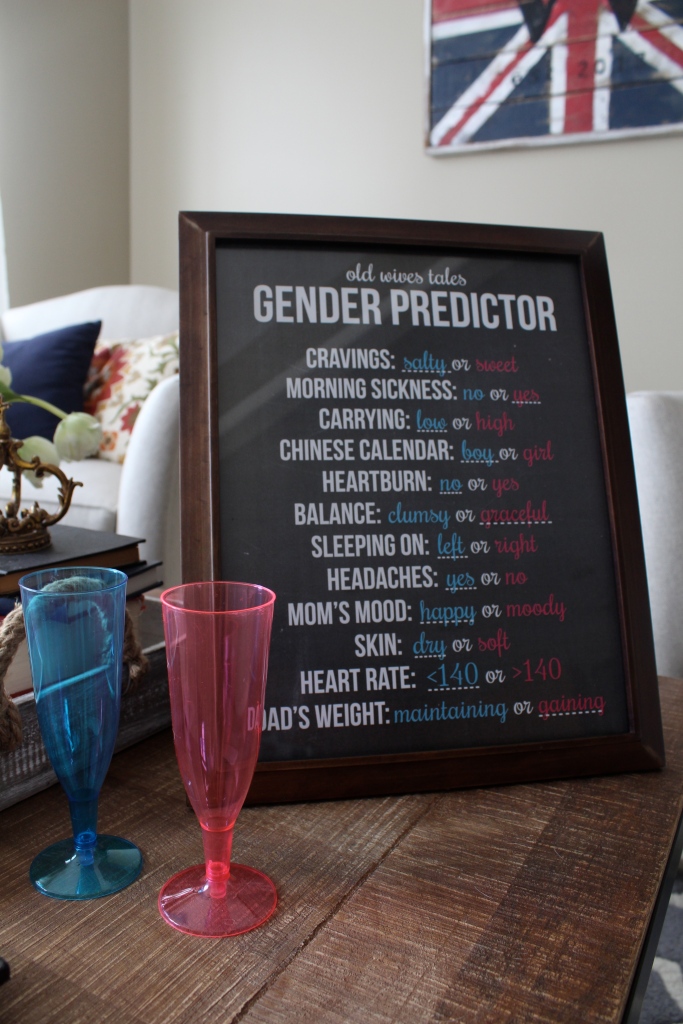 Once everyone casted their votes (about 20 minutes later…it was a tough choice!) we took group photos so that we would have “evidence” of who was right and wrong. Bryan and I casted our votes too. On the morning before the appointment we made sure to each cast our OFFICIAL guess so that we would be able to participate in the fun.

After all of the guesses were made, we had another part of the plan in order to surprise the family. Bryan took Rooney downstairs to the basement to go outside to take care of his business…and when Rooney came upstairs he delivered the news with a balloon that was tied to his collar! Here is a video of exactly what happened!

The party was a great success and we enjoyed spending time with our family! After the party was over we made sure to call Bryan’s dad in Florida to let him in on our big news! To our family near and far: we love you all so much & are so grateful to have you in our lives! Here are a few more pictures from the party:

A few days later we announced the gender on social media to the rest of our family and friends. Since Rooney had already done so well announcing at the party, we let him do the honors on Facebook too!